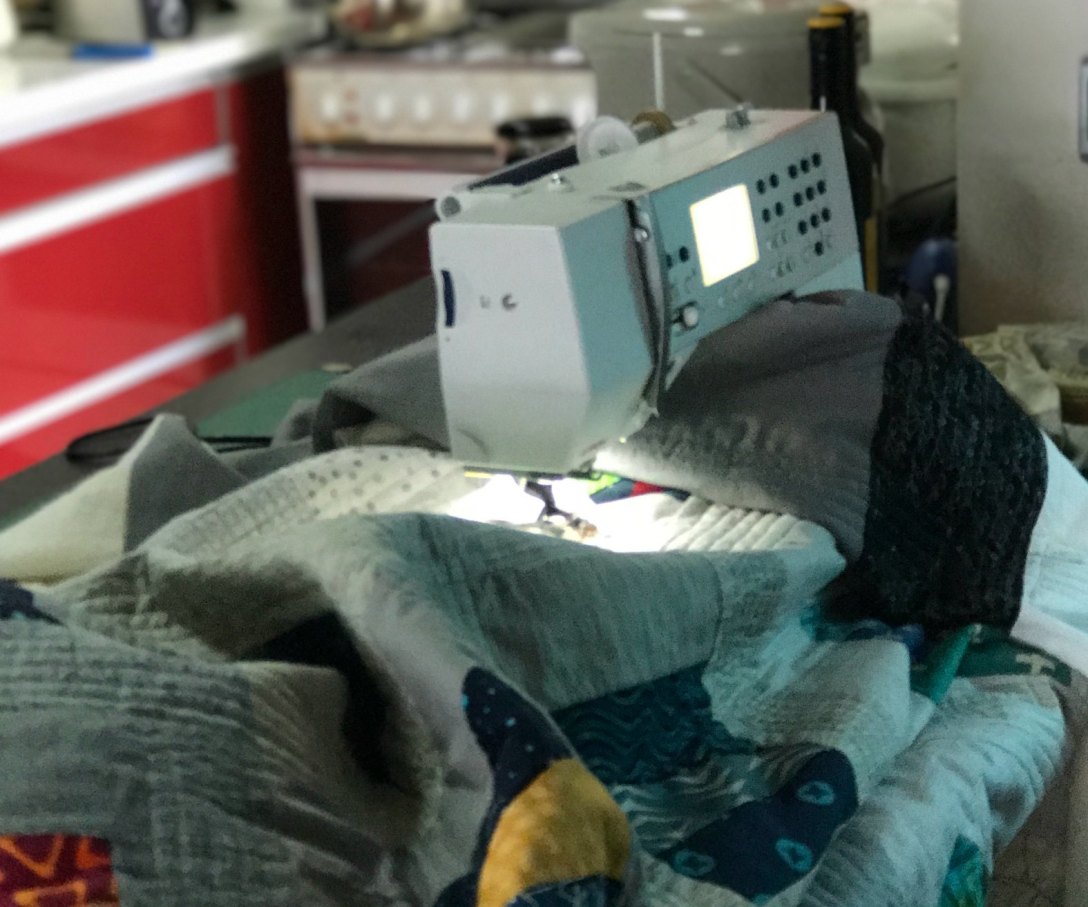 I have seen blogs celebrating slow sewing and an appreciation of the experience of creation.  This is not that kind of slow sewing.  I am half way through…more than half way through! my Chinese New Year break, and I have just today finished my preparations for work next week.  I have made some quilting progress. The background quilting on my Dawn to Dusk?  Through the Looking Glass? quilt is now half way done. My quilt sits waiting for me in the sewing machine, ready whenever I want to sit down and get a bit more done.

I find the quilting slow though.  There are a lot of stops and starts, and no creativity involved in the straight line quilting, so I am not doing as much as I might if I were more excited about this stage of quilting.

I also discovered I made a mistake in my arrangement of the lines.  I wanted to create a pattern of weaving, but to make sure I got my lines reasonably straight, I used the middle seam between blocks as a guide for the first line.  I did one set of vertical lines, then switched the direction to do horizontal lines, again starting with the seam between blocks and working inward.  Unfortunately, for some reason I went the wrong direction on my lines, quilting from the center toward the left block on the vertical, but from the center to the right block in the horizontal direction.  The result of this is that when I add the second set of vertical or horizontal lines, instead of getting over-under/under-over, I will get over-under/over-over.   That may not be very clear, but once it is done I will show you and you can cry with me.   I will just have to learn to live with it!

In other news, I have found a number of my quilts have damage that will need to be repaired!

It’s not at the seams, and though the quilt have been washed a few times, there’s nothing in the washing machine that it could catch on.  I think I actually know what has caused this damage though.  He has four legs and fur…

I’m pretty sure when I have left quilts on the couch or chair, he has climbed up and scratched at them to get them in just the right position…I’m not quite sure how to repair those…I could cover the tears with other material, fuse it down and hand stitch the edges. Another project..

First Sight, Second Thoughts, Third Thoughts and that tiny bit that will not melt and flow..Secretly hoping one day I'll look out my window and see a madman in a blue box..and avidly quilting whenever I get the chance. View all posts by Quilt Musings